When in the film we hear people going to swim at the river we would suppose that it is about the Serio river. Luca Guadagnino takes us to a little hidden gem near Crema instead, to Laghetto dei Riflessi. The Pond of Reflections is in Ricengo, meaning a half an hour bike ride along the river to the beautiful Park Serio, a protected bird- and wildlife sanctuary. Although we know the lake from the film as the place where Elio and Oliver swim in the morning or the afternoons and where Elio takes Marzia for a late night skinny dipping, bathing in the lake is prohibited being very dangerous and also, to protect the nesting place for the birds. Visiting Lago dei Riflessi is a must-do road trip from Crema for a picnic and to admire the scenery. 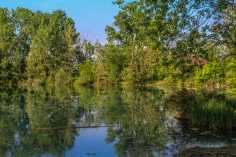 Morning sun on the lake

Morning by the lake

The road to the lake

The way to the morning swim

If one arrives to the place via Castello, before leaving the road that leads to Ricengo, the amazing park’s entrance is guarded by a little church built in 1619 and named after the one of the most important figures of the counter-reformation in Italy, San Carlo Borromeo. He is the patron saint of bishops, cardinals, seminarians and spiritual leaders and was canonized by Pope Paul V. in 1610.  In the XVIII. century the church was part of the wealth of the very influential Barelli family.

If arriving from Ricengo headed towards to the Palata Menasciutto natural reserve, there is a small chapel built in 1855, also worth to see. Cappella dei Morti del Serio is a chapel to commemorate those fallen in 1705, in the battle between the army of Eugen de Savoy and the forces of the Marshall of Vendôme.