My visits to Moscazzano were not only about the Villa Albergoni. I enjoyed spending some time with the young mayor of the commune, Gianluca Savoldi who told me about his love for his hometown and the history of the place. He proudly mentioned the name of the famous Italian engineer, Arturo Caprotti who was born in Moscazzano in 1881. In 1921 the first steam locomotive was put in operation thanks to Caprotti’s revolutioning invention, a valve control designed by him, also called the Caprotti control. The road between Crema and Moscazzano – where I cycled so many times during my days in Cremona – is also named after the village’s famous engineer.

It was my pleasure to walk around Moscazzano and meet its awesome people. I can still recall the very first evening when I rolled into the village coming from Corte Palasio via Rovereto. It was shortly before the sunset and I stopped my bike at the Piazza Gambazocchi. Kind local people came to greet me and offered to take me that photo in the piazza where Signor Oliver often visited the bar for some poker games.

The village was first mentioned in historic documents more than a millennium ago, in 979 as Muscaciano. The parish church of St. Peter from the Piazza Gambazocchi was built between 1797 and 1801. Among the places to visit in the commune I definitely have to mention the Sanctuary of the Madonna dei Prati dated from the 15th century. And now let me take you to a walk around the sunny Moscazzano.

The church of St Peter seen from via Montodine

The ride from the town to Moscazzano

View from the shades of oak tree line 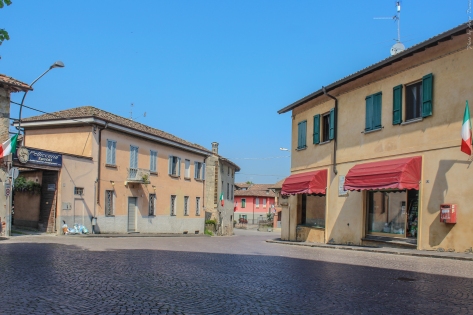 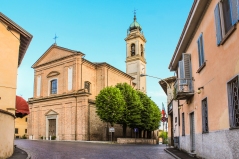 The parish church of Saint Peter at Piazza Gambazocchi 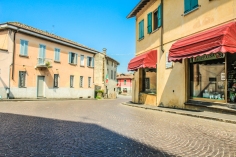 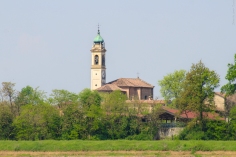 The church of St Peter 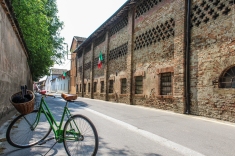 Arriving to Moscazzano from Crema on via Caprotti 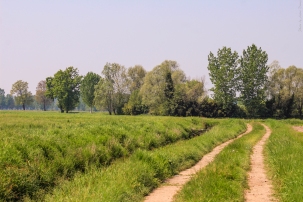 The spire and the bell

Some behind the scenes from Moscazzano: