“Wait for the summer to end” ?!…. Definitely not. Crema is enchanting anytime but if one wants to see it in its splendor, would need to visit in the summer. The sundrenched piazzettas in the morning crisp with the intense smell of the espressos infusing the morning air from the open doors of the coffee shops. The tiny and crooked alleys, the cobblestone streets telling endless stories of the past, and, sometimes even of the present world. One would have thought the early morning wakes up only those who with straight and sleepy faces hurry to catch the buses not to be late to work. But there are also all those vivid people around the caffès who wouldn’t miss the morning papers at Il Giornale or La Provincia with a fresh espresso and some pastries seasoned with some chit-chat with the baristas or just random partners about politics or the latest news. Only the bells from the dome would remind them about the time, now and again. The time that seems to walk slower here just like we experienced it in Luca Guadagnino’s film. Piazza Duomo would get crowded soon in the midmorning laziness but would be quiet during the siesta hours at noon. Italians who respect themselves – and who doesn’t? – would withdraw for lunch and some well-deserved rest, to fill the chairs at the tables of the piazzetta later on, for the rest of the day cheering some grappa or wine.

A goodbye view from Via Mazzini on my last morning 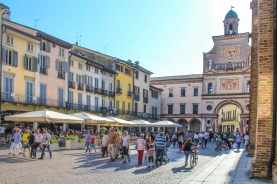 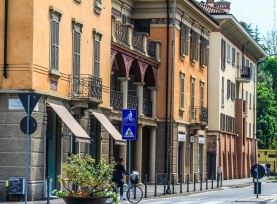 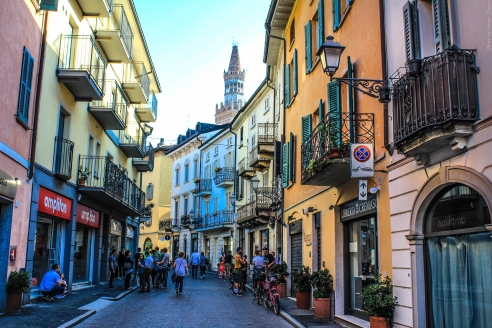 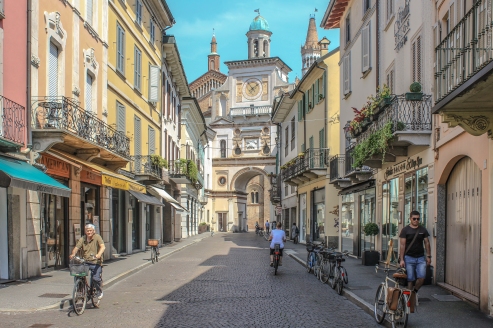 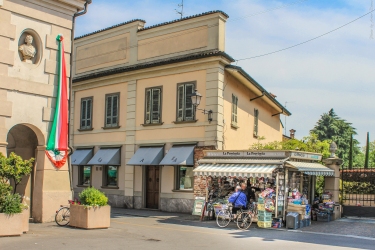 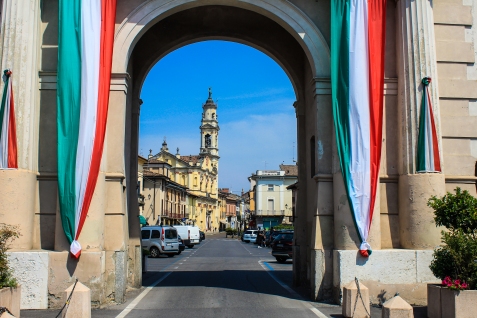 Trinity church seen from Porta Ombriano on Via XX Settembre 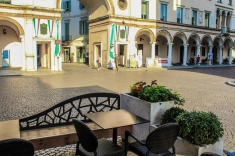 Morning in the piazzetta

The terraces getting alive after siesta

The mall on Via XX Settembre 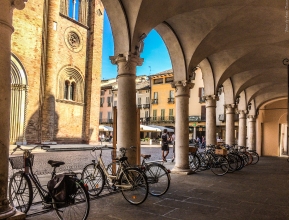 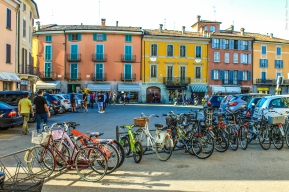 Piazzetta after the siesta time 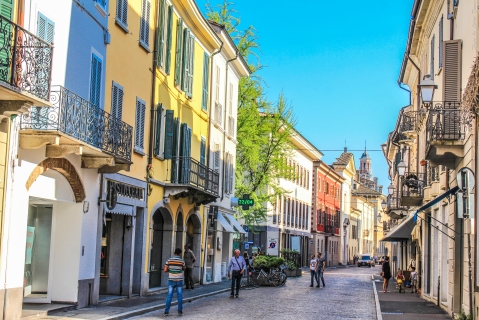 Via Matteotti in the afternoon sun 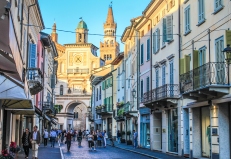 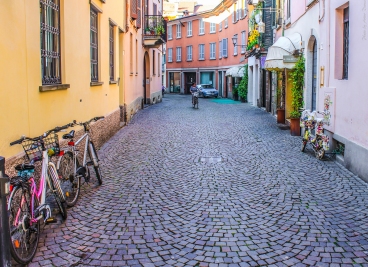 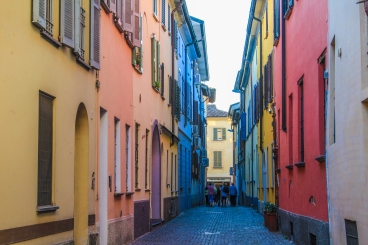 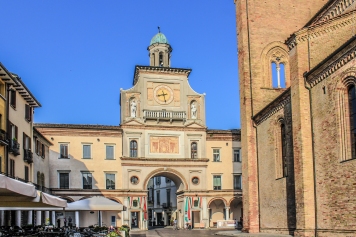 Morning sun on Via XX Settembre

Afternoon life in the piazzetta

The imposing renaissance gate, Il Torrazzo dominates the main square since the 15th Century, connects the piazza with the main street, Via XX Settembre. Once in Piazza Duomo the first place to visit is obviously the dome, Duomo di Crema, Cattedrale di Santa Maria Assunta. The typical Lombardian gothic building stands since 1340. 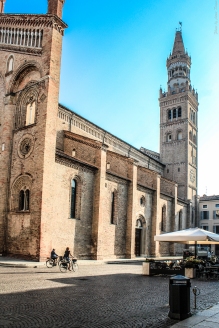 The bell-tower of the dome 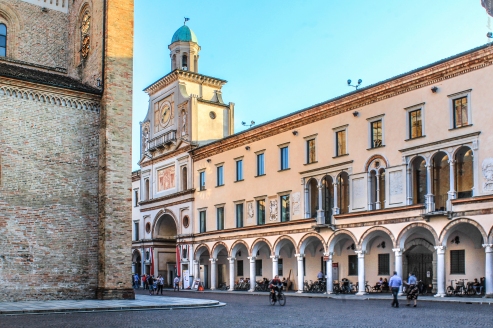 The Torrazzo and the arcades 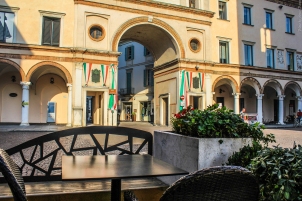 The typical Lombard gothic facade of the cathedral

Across the main entrance of the cathedral the arcades – also well-known from the film – host the Pro Loco Crema Info Point with awesome people who would gladly walk you around the points of interest in the area. Since this year’s biggest sensation in Crema was the success of the film, I could not resist the offer to sit for a moment at the table where Elio and Oliver sat in one of the scenes. Not only was I photographed at that table by the great Alberto from Pro Loco but the ladies surprised me with “Call Me By Your Name” postcards and maps of the filming locations.

One of those early mornings I got to sit again at that table this time with Lidia Gallanti, a local journalist for some chat about my visit in Cremona, and generally, about my travels.

From the dome and the arcades we don’t have to walk anywhere to see the famous balcony of the Town Hall where Giuseppe Garibaldi has held a speech, and the Pretoria Tower, also known as Torre del Capitano, built in 1286 according to some historians. Next to the dome is the bishop’s palace, Palazzo Vescovile dated from 1548.

The dome, the Torrazzo and the arcades

In Piazza Duomo there’s the newsstand, La Provincia and, just around the corner, on Via Fortunato Marazzi there’s the Palace of Benzoni – Donati built in the 16th century.

Walking past the passageway on the narrow alley, Vicolo Marazzi – the one we saw in the film when Marzia walked hand in hand with Elio from the arcades, we also get to the Piazza Premoli. The palazzo that gave the name to the square on Via Benzoni is not only the place where the two kissed. Is also Guadagnino’s home and where Timothée Chalamet spent so much time in the spring of 2016 with his music professor, the composer, Roberto Solci, learning to play piano and where both Timothée and Armie Hammer spent so many evenings after work watching classics together with the director and his company.

Francesca – my sweet superhost at Sweet Home Pitty on the above mentioned Via Benzoni – helped me catch up with the local routines. She lent me a bike to have proper transportation that is essential to explore the area. She also brought it to my attention that leaving Crema without tasting the authentic cuisine, especially Tortelli Cremaschi would be an unforgiveable mistake. All of a sudden a scene from the film came to my mind, the one when Mafalda is cooking the local speciality in the kitchen of the villa.

My first selfie in Crema

The last Sunday of the month is always busy at the flea-market in Piazza Trento e Trieste, that locals still call the Austro-Hungarian Market. It is maybe because the marketplace was originally created to honor the second visit of Joseph I, the Austro-Hungarian emperor to Lombardy. But even if you can’t be there on one of those Sundays, is still worth to pay a visit to the piazza to see the building of Teatro San Domenico – which also hosted the castings for the film in 2016. 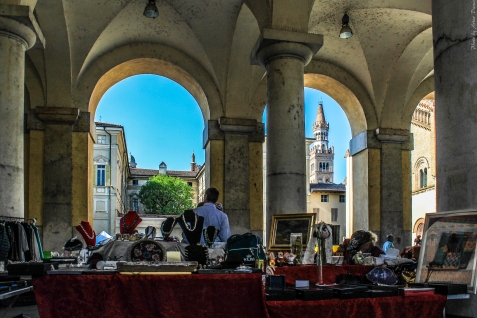 The view from the Austro-Hungarian market