When I’ve first told the mayor of Moscazzano, Gianluca Savoldi about my visit, neither of us knew that weeks later signor Francesco will be so kind to take our photos on the lawn in the front of the “Call Me By Your Name” villa.

The villa that in Luca Guadagnino’s film serves as the home of the Perlmans and takes us back in time to the now vintage eighties and to the sundrenched summer when the romance between Elio and Oliver blossomed, is an imposing mansion just across the mayor’s office on Via Roma. Now it is called Palazzo Albergoni.

The influential Vimercato family from Milan in the 13th century settled in Crema and on the ruins of a former castle built a fascinating country house for themselves. Through the centuries the mansion suffered numerous modifications, notably in the 18th century when the villa got its main appearance. When Angela Vimercati Deseverino married the Count of Griffoni Sant’Angelo in 1776, the villa became property of the Griffoni Sant’Angelo family. Giuseppe Perletti purchased the villa in 1865 and 12 years later his nephew, Saverio Stramezzi inherited it. The villa remained property of the Stramezzis to 1958. Three years later Pierre Albergoni became the new owner.

When we returned to his office, Gianluca pointed to the picture on the wall. It was Finoli Bassano’s engraving depicting the villa and the garden with the pond. The artwork was a gift for Count Griffoni Angelo, the last Griffoni owning the villa between 1823 and 1852. The picture was also used on early postcards.

The famous mansion is still a private property and it is not open for public. After the success of Luca Guadagnino’s film, Palazzo Albergoni hit the real estate market. According to the description, after entering the villa we find ourselves in the large hallway with a barrel vault ceiling and a terrazzo floor that crosses the whole building allowing the visitor to catch even the view of a portion of the park located beyond the villa. The main hall and some of the rooms have beautiful frescoed ceilings painted in the 16th century by Aurelio Busso. There’s also a cellar accessible from the main staircase. At the front entrance, surrounded by trees there’s a carved stone statue facing the front balcony from the first floor – well known from the film. There’s a balcony, a smaller one in the back side, as well. That one overlooks the huge park behind the mansion and the stairs that lead to the valley, with two beautifully carved columns on the upper end of the stairway. The only modification brought to the villa during the filming was the transformation of the animal water trough into a small swimming pool in the backyard. 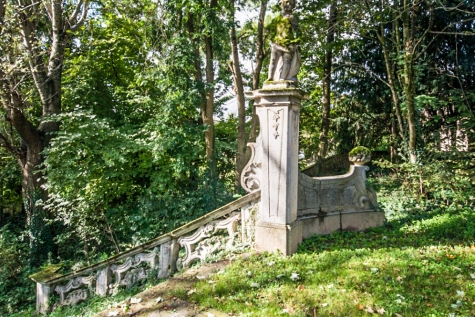 “I come out here for hours almost every night…” 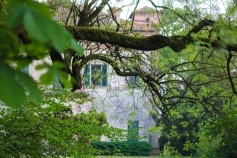 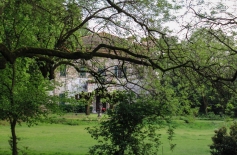 The statue at the front entrance 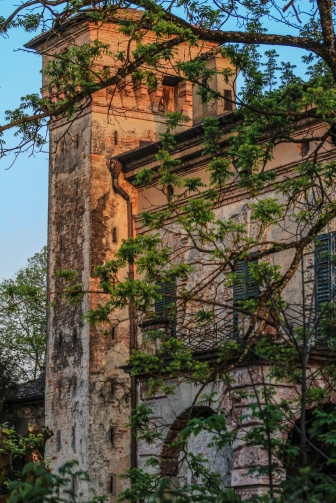 The East Tower in the sunset

The side entrance to the villa from Via Montodine 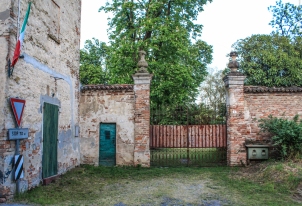 The side entrance from Via Montodine

Via Roma & Via Montodine corner 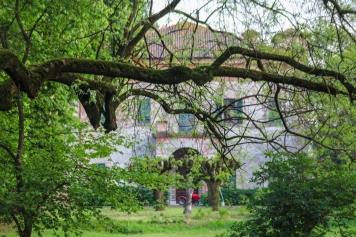 The villa in sunset 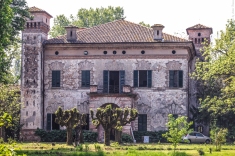 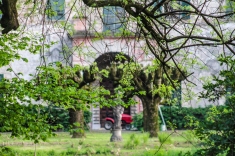 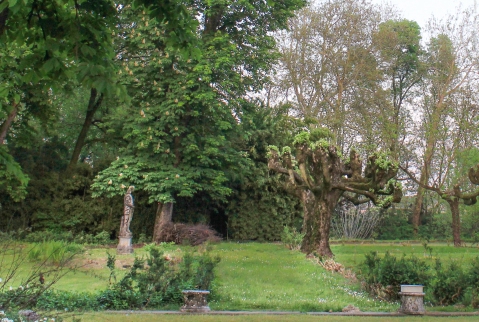 The side entrance to the villa from Via Montodine

The west side of the front garden