Walking from the Piazza De Amicis towards the edge, there’s the Marabutto with the gorgeous view of the Cape Sant’Ampelio – the southernmost point of the Italian Riviera, the one that divides Riviera dei Fiori from the San Remo Bay. We can hear the conversation from three decades ago:

“Just take a look at this” he said as we ambled with our bikes in the midmorning sun toward the edge of the piazzetta overlooking the rolling hills below. (…)

“You do know who is said to have drowned near here,” he said

“And do you know what his wife Mary and friends did when they found his body?”

“Cor cordium, heart of hearts,” I replied, referring to the moment when a friend had seized Shelley’s heart before the flames had totally  engulfed his swollen body as it was  being cremated on the shore.

This dialog refers to the legend of Percy Bysshe Shelley, one of the greatest English romantic poets who met his end – according to some historians – in the Gulf of La Spezia in Liguria where his boat sank. His grave in Rome bears the Latin inscription “Cor cordium”. According to a legend based on the story preserved by the family when Shelley’s body had been cremated, his friend Edward Trelawny had snatched the whole heart from the pyre.

Is it just a coincidence that Oliver recalls this legend walking to Marabutto at the end of the piazzetta – from Piazza De Amicis, named after the Italian novelist, Edmondo De Amicis, author of the novel “Cuore” (Heart) … ? 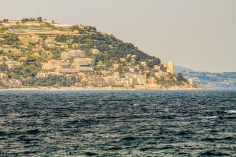 The boat yard and the Grand Hotel Del Mare 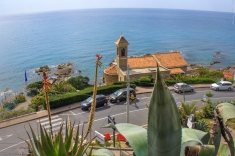 One of the three cannons from the Marabutto 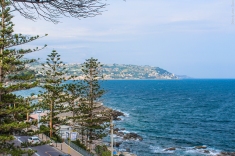 Marabutto at the edge of Piazza De Amicis

Is there anything you don’t know?